This is the Shore Excursion from Carnival that we purchased:

Travel back in time as your guide takes you on a journey back to December 7th 1941. December 7th, 1941 will forever be etched in stone as the day Pearl Harbor was attacked, forever changing the world. Visit the World War II Valor in the Pacific Monument and the Arizona Memorial. In USS Bowfin Submarine Museum you'll also enjoy an audio tour. Next, a tour guide will take you aboard the USS Missouri where the Japanese surrendered and the war in the Pacific ended. Continue to the Pacific Aviation Museum which traces the history of air battles throughout the Pacific. Your luxury air conditioned mini coach features custom seats, seat belts, cell phone charging stations and immense viewing windows. There has been damage to the dock at the USS Arizona Memorial. Unfortunately, guests will not be able to step onto the Memorial, however, the tender boats will bring them as close as possible for viewing & photographs. The federal government is currently working on repairs, however, has not given us a date as to when repairs will be done. We are monitoring the situation & will advise you if / when we hear anything. Due to increased security measures, the following items are prohibited along with any other items that allow concealment: backpacks, diaper bags, fanny packs, camera bags, purses, luggage, shopping bags, and large cameras. Baggage storage will be available at the Pearl Harbor Visitor's Center for a $5 fee per item.


Our cruise ship as seen from our tour bus


The above are the maps for our tour

The first thing our tour bus had to do was park at the "World War II Valor In The Pacific National Monument" entrance so that we could check our bag in. They don't allow ANY bags of any size into the exhibit area. We paid $5 to check our one bag. It was a pretty long walk from where the tour bus parked to the place to check bags. The tour bus itself had to be completely clear of any bags as it would be driving inside the secure area. After checking our bags everyone reboarded the tour bus to head to the first tour destination inside the secure area.


"They fought together as brothers in arms,
they died together and now they sleep side by side.
To them we have a solemn obligation --
The obligation to insure that their sacrifice will help
to make this a better and safer world in which to live."

We were given a guided tour about the history of this ship on the deck and then allowed to wander on our own. Below are photos from our tour through the USS Battleship Missouri. We stood on the spot where Japan signed the terms of surrender.


Photo of the signing of the surrender documents.

Over this spot on 2 September 1945 the instrument of formal surrender of Japan to the Allied Power was signed thus bringing to a close the Second World War. The ship at that time was at anchor in Tokyo Bay.


Me and Barbara on the deck of the USS Missouri


Right: A jet seaplane. I've never seen one of those before

Many of the museums and exhibits were located through this main entrance including the USS Arizona Memorial and the USS Bowfin Submarine Museum.

Tour of the USS Arizona Memorial

Our tour guide had prepurchased tickets for the 2:15 PM tour of the USS Arizona Memorial. Since we arrived at the entrance at about 2 PM we had to go directly to that section of the grounds. Normally one would view the exhibits in the order listed on the tour map. At 2:15 PM we entered the theater and watched about a 30 minute movie all about the events surrounding the attack on Pearl Harbor and the sinking of the USS Battleship Arizona. At the end of the movie, doors opened that led directly to a boat to take us to the USS Arizona Memorial. The boat is operated by the navy.


Right: Mooring used by the USS Nevada when it was attacked


USS Arizona Memorial - The sunken ship is directly beneath the memorial


USS Missouri viewed from the water

The Rest Of The Exhibits


The Tree Of Life


Left: Submarine in background
Right: Entrance from the deck of the submarine

The tour bus got back to the ship at about 5 PM. Since the ship was not expected to depart until 11 PM we still had plenty of time to do something else in Honolulu. We decided to take an Uber to the "Amuse Wine Bar" which was less than a $10 ride from the ship. The "Amuse Wine Bar" has a rating of 4.5 out of 5 stars and many excellent reviews. The Honolulu Pier has a Ride Share pick-up area that is a long walk from the ship, much longer than where there was a long line of taxis waiting to pick up passengers. It took less than 30 minutes from the time that we called the Uber until we arrived at the "Amuse Wine Bar".

At the wine bar we ordered a cheese plate and a pizza. Both were excellent.


Barbara enjoying one of our wine selections

They had 3 sets of red wine self-serving dispensers in the center area of the wine bar and 2 sets of refrigerated white wine self-serving dispensers. The red wine dispensers would only pour 1 ounce per purchase. At the white wine dispensers you had the option to purchase 3 different sizes: a taste, a medium pour or a full pour. We tried a number of different wines, some that we were familiar with and some that we were not. Once we found some that we liked I started purchasing 5 pours at a time to create 5 ounce glasses of wine instead of having to keep getting up to pour one ounce at a time. 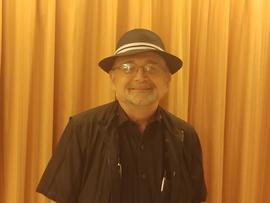 A Photo Of Me, Steve Grande, From A Prior Day

The end of our second day of touring Hawaii.