This is the Shore Excursion from Carnival that we purchased:

Start your tour with a leisurely drive through what is known as the "Hilo Walk of Fame" for the banyan trees planted by celebrities & vitis Liliuokalani Gardens, the largest ornamental Japanese garden outside Japan. You will also view one of Hawaii's Iconic Statue of King Kamehameha. Enjoy expert commentary of Hilo Town as you make your way to Wailuku State Park and the picturesque Rainbow Falls. You will then continue to the majestic Akaka State Park, where you can see two gorgeous waterfalls: 100 foot Kahuna Falls and towering Akaka Falls which plummets 422 feet into an eroded gorge. Continuing with your journey to the famed Nani Mau Gardens where you will see spectacular orchid gardens and other rare plants and tropical fruit. You will sit and enjoy a delicious buffet lunch at the Garden Restaurant. Finally on the way back to the Pier you will discover a world of marine science at the only black-sand beach in the Hilo region. There are steps at the falls.

I don't even see this stop on the tour description but I'm glad that we stopped here. It was interesting to see the process of candy being made, though I personally worked in the Duran Candy Factory while attending college in 1969 and was already a bit familiar with the process. We also enjoyed sampling some of the fresh Kona coffee.


Kamehameha the Great was born in the 1750s and rose to become one of the most important figures in Hawaiian history. He lived during a period of great transition in Hawaiian society, having witnessed the arrival of the first Westerners when he was in his early 20s. Kamehameha was a fierce warrior and an able leader who successfully consolidated control over all the islands by 1810.

Kamehameha was a frequent visitor and resident of Hilo. While in his mid 40s, he oversaw construction of the great Peleleu Fleet from the shores of Hilo Bay. The fleet consisted of over 1,000 canoes and included massive war canoes capable of carrying over 100 warriors each. Many of the great peleleu canoes were hewn from koa trees harvested from the forests of Mauna Kea. The fleet was provisioned from the rich natural resources of the Hilo area.

On The Way To Kahuma Falls
On The Suggested Circle Route

On The Way To Akaka Falls
On The Suggested Circle Route


Click above to watch a short video clip of the waterfall

Me and Barbara at Akaka Falls

On The Way To The Exit
On The Suggested Circle Route

Rainbow Falls
From The Higher Lookout


A massive tangle of tree roots above ground

Rainbow Falls
From The Lower Lookout

We had a nice buffet lunch that was included with the tour and then toured the gardens. The tour bus arrived at Noon which was 30 minutes ahead of our scheduled time to be here at 12:30 PM. We were told to be back at 2:15 PM which would give us 2 hours and 15 minutes for lunch and walking the garden. Below you can see Barbara in front of a number of the flowers in the garden.

Click the above to hear Barbara ring the bell

I didn't want to say anything but it seemed this was the most sparce garden I had ever seen. When we got back to the tour bus the driver said that he had stepped into the garden and never seen it in worse shape. Evidently some wild pigs had gotten into the garden and destroyed much of it. Almost all that was left were trees and some of the larger plants. We enjoyed the beautiful plants that we did see, but it didn't take two hours to view what was left. Everyone was back on the tour bus very early. The tour bus driver decided that we should leave early which would give us more time to spend at the black sand beach.

Because it was "high tide" it took us a while to find a patch of beach that was not already under water. Eventually we did find a large area of black sand that we were able to walk on and pick up a handful to take a closer look. There were so many cars in the parking lot that our driver could not find a spot to park the tour bus. Instead he double parked in front of the beach and got out and directed traffic to let each direction of traffic take turns. You can see him directing traffic in an above photo.

We went out on the forward outside balcony on deck 6 to watch the lunar eclipse. It was pitch black on that balcony which is great for viewing the moon and stars. There were already several people out there. The peak of the eclipse was at 7:15 PM Honolulu time. When we came out the moon was already a deep read. You can see the photos that I took over a 60 minute time span.

"Supermoon" occurs when the full moon is at the closest point of its orbit to the Earth, which is also called the perigee. That makes the moon look extra close and extra bright - up to 14% bigger and 30% brighter than a full moon at its farthest point from the Earth, known as the apogee, NASA said. "Blood" moon. That is just the reddish color the moon will appear during the total lunar eclipse. The moon won't turn black or vanish from the sky; instead it will appear to be a "reddish copper color," Murphy said, hence the name blood moon. Although the moon is in Earth's shadow, some sunlight still reaches the moon. The sunlight passes through Earth's atmosphere, which causes our atmosphere to filter out most of the blue light. This makes the moon appear red to people on Earth. "Wolf" moon. According to the Old Farmer's Almanac, Native Americans called the January full moon the "wolf" moon because it appeared when wolves howled in hunger outside the villages. The almanac said ancient peoples commonly tracked the seasons by following the lunar calendar (vs. today's solar calendar). For millennia, people across the world, including Native Americans, named the months after nature's cues. -- USA Today, Jan 3, 2019. 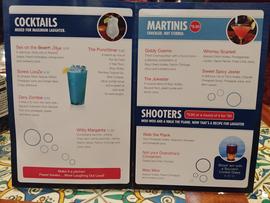 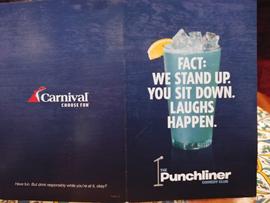 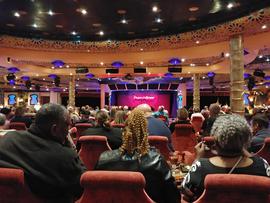 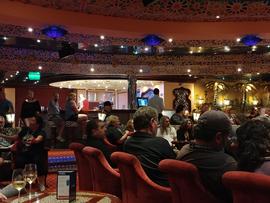 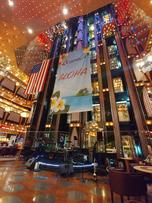 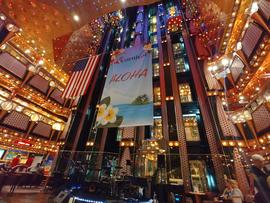 I really wish Carnival would not hang these huge banners and flag in the center of the lobby. There are other places where they could hang the banners and flag in the Atrium Lobby that could be seen by all and not impair the visual spaciousness of the room. They could hang them flat against the back atrium wall or down flat against the balconies. I'm sure the architect of this part of ship intended everyone to be impressed and enjoy the wide open feel to the room. With these things hanging in the middle you can't completely watch the glass elevators rise and fall. It also greatly interferes with the view of the lobby by the people riding the glass elevators and the view of the bands by people on the upper levels. When we were trying to watch the band from an upper level, all we could see where the legs and feet of the band members.

The same thing happened at the Luxor Hotel in Las Vegas. Originally the huge atrium was completely empty giving hotel guests on every floor a clear view of the entire lobby and casino below. I'm sure this was the effect the architect had in mind. But little by litte the Luxor kept filling up the entire space with enclosed exhibits and other rooms. Now when you look down from the upper levels all you see are boring roofs of interior structurs.

People seem to feel that wherever they see an empty space, they must put something into it. Sometimes an empty space is meant to be just empty. Empty space designed into a structure by an architect usually is for the purpose of creating a feeling of openness. To put things into it that interrupt the openness defeats the architects intent and interferes with the feeling of spaciousness. My suggestion to Carnival is to stop hanging things in that interfere with the openness of the atrium and instead hang them flat against one of the atrium walls.

I am a bit sad the new Carniva Vista class cruise ships like the Carnival Vista, Carnival Horizon and Carnival Panorama no longer have the tall atrium lounge with the glass elevators. Instead they have computerized elevators that seem to be a problem whenever there are a large number of passengers that need to use the elevators all at once such as embarkation, going to dinner, and going to the main theater performance. If they still had the tall atriums with glass elevators and kept them as non-computerized, it would greatly help when large crowds all needed to use the elevators at the same time. The tall atrium also give an impression of great spaciousness that is generally lacking on the new Carnival cruise ships. 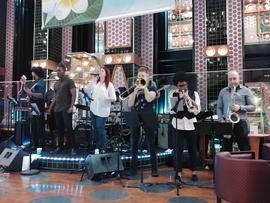 Solid Brass added a trumpet player in addition to the saxophone and trombone players that have been with us since Long Beach. Most likely the trumpet player boarded the ship in Hawaii unless she hs been onboard all along and we just weren't at the performances where she was with the band. 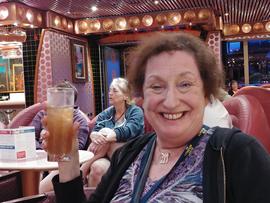 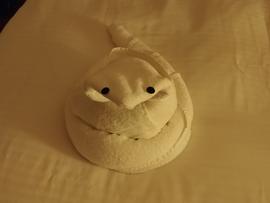